It’s a little over a year ago that I got solar panels installed on my roof. Not a Tesla Solar Roof, but the most efficient solar panels available last year. From SunPower. The SPR-X21-350-BLK. Together with a SolarEdge SE5K converter its producing 5300 Watt during peak hours.

I’m interested if a Tesla Powerwall is worth it financially. Will it pay back the investment in a reasonable amount of time?

Starting in 2023 the net metering policy will be phased out gradually. Based on the current pricing you pay around €0.25 per kWh, but for delivering you only get between €0.04 and €0.12 per kWh depending on the contract with your supplier. It becomes financially more attractive to use as much electricity as possible from your solar panels directly or via a battery.

Preparing for the year 2023 I have some research questions after one year of having solar panels:

Since the start I’ve been collecting metrics from the Solaredge inverter using a wrapper script around sunspec-monitor. The main metric I’m collecting from the inverter is the “energy_total” metric, which is the total amount of Watt hours produced by the inverter. This metric is collected every 60 seconds and stored in InfluxDB.

Using a USB cable connected to the P1 port of my electricity meter I’m also collecting metrics about the amount of electricity consumed from and delivered to the electricity network every 60 seconds. 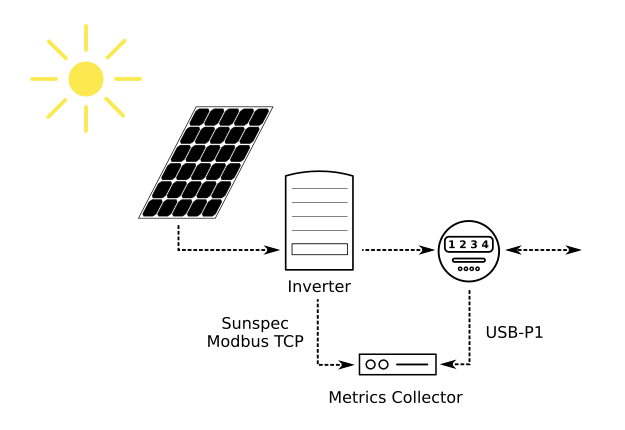 Overview of metrics collection from Inverter and Electricity Meter

When turning this data into a graph, on a sunny day it look like this: 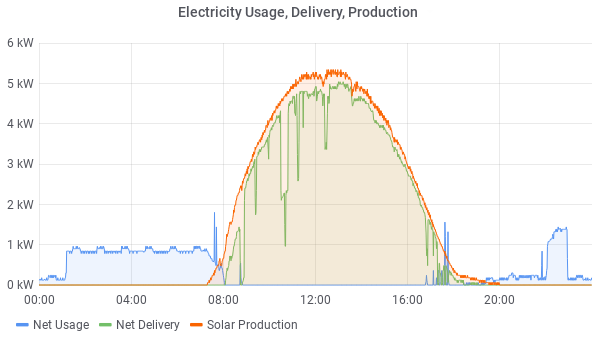 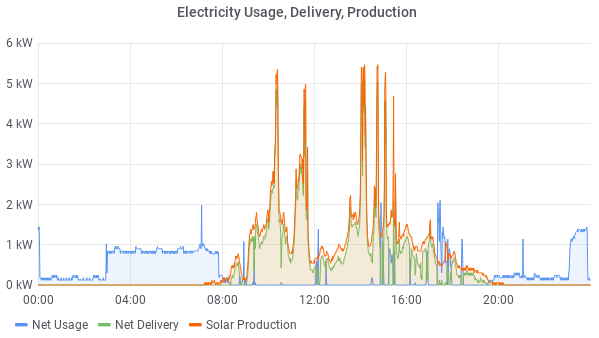 Looking at some day graphs is nice, but what does this mean overall in a year?

The answers to the 1st two questions is pretty easy to find. Take the number from the 3 columns in InfluxDB from today and subtract the values from 1 year ago.

The answer to question 3 can be answered by subtracting “delivery” from “production”. Its also possible to have per minute statistics for direct consumption by creating a “Continuous Query” in InfluxDB:

The Continuous Query will only generate new “consumed” values. To generate previous values, execute the part between BEGIN and END once.

For the answer to question 4, we need to sum “consumed” (generated by the previous Continuous Query) and “net_used”:

In InfluxDB it now looks like this (first and last metric of year 1):

Putting the results in a Grafana dashboard gives an interesting overview of year 1: 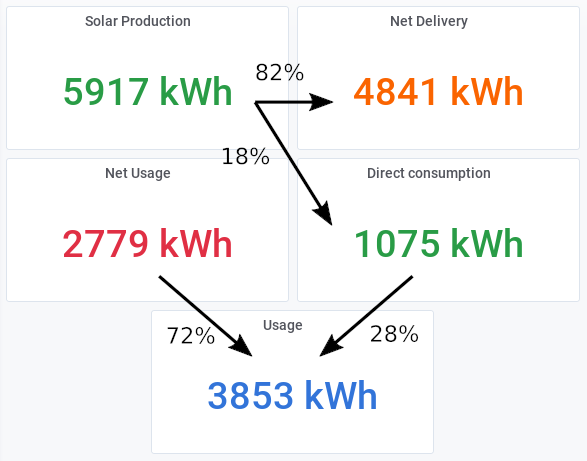 The answers to my questions:

The solar panels produced 54% more then I consumed in total, but still I need to get 72% of my electricity from the electricity network. The average daily production/usage graph below shows why. Most of the electricity is consumed when the sun is not shining. 😕

The Tesla Powerwall. There are many interesting things to write about it, but let’s keep it simple and focused. Some specs:

With all the data in InfluxDB and the specs above, it is possible to simulate a Powerwall minute by minute. I’ve written some python code that does this. In the simulation the battery has a minimum threshold of 500 Wh, a maximum of 14000 Wh and it takes the Round Trip Efficiency of 90% into account by dividing by 0.9 when electricity is used from the battery.

A part of the result is shown below in a graph with the simulation of 3 days. To compare, I’ve also created a graph without the Tesla Powerwall simulation.

3 day electricity usage, delivery and production without a Tesla Powerwall

What would this have meant when I would have had a Powerwall in the past year? These statistics can be collected the same way the “Statistics for Year 1” were collected.

Querying InfluxDB for this data shows that with a Powerwall, 2877kWh would have been delivered to the electricity network and 1021kWh would have still been used from the network. This Grafana dashboard gives a clear overview: 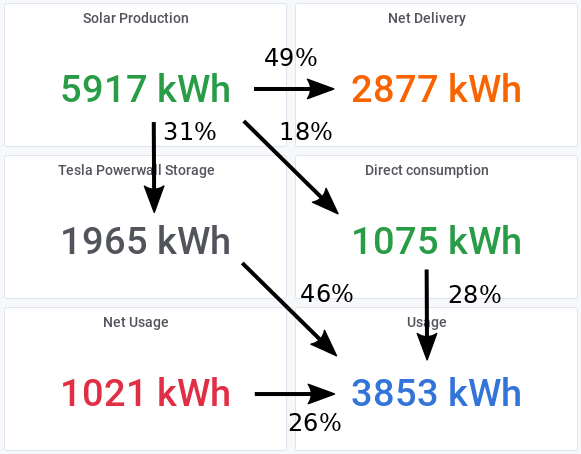 Without a Powerwall I needed to get 72% of my electricity from the network. This is now reduced to 26%. 31% of the solar production gets stored in the Powerwall for later use.

Why do I still need to get 26% of the electricity from the network? 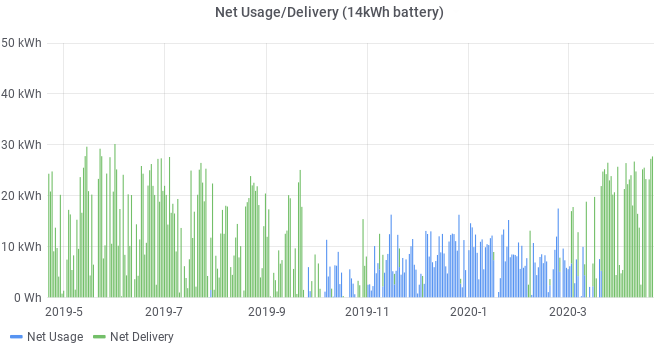 The graph above shows why. In the winter there is just not enough solar production to cover my needs. The graph below shows the same data, but without a Powerwall. 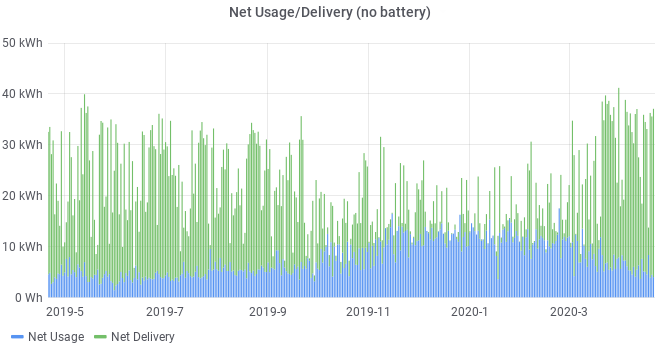 Back to the simulation. What does it mean in terms of costs/profit, again taking €0.25 per kWh for usage and €0.11 per kWh for delivery.

Conclusions from Simulating a Tesla Powerwall#

So is it worth investing in a Tesla Powerwall to use more of my own solar power?

It depends on your investment horizon. But for me it’s a “No”. 23 years is a bit too much. Taking into account that the Tesla Powerwall 2 only has a warranty period of 10 years. Besides that the battery quality will get worse over time and the storage capacity of the Powerwall will decrease.

You have to get it while its hot, right? Definitely with solar. To prepare for the year 2023, you should use as much electricity from your solar panels directly as possible. Also if you have a Tesla Powerwall.

I’m not going to cook earlier during the day. And the low-temperature heating mostly happens in the winter during the night to keep the in-house temperature stable, which is supposed to be efficient already. But what could be done is heating the hot-water storage tank during the day, when there is solar power available. This should decrease the amount of electricity delivered to and used from the electricity network.

You don’t have to buy a Telsa Powerwall. There are many alternatives, like a battery from the LG Chem RESU series. I’ve done the same calculations as with the Powerwall, without net metering, €0.04 per kWh for delivery. With a Return on Investment of 12 to 14 years, this seems to be more interesting then the Powerwall.